The eee-days are rapidly approaching with only ONE(!) day left until we kick off the actual fair. You might be familiar with the concept of eee by now, however, keeping up with all of the new features to this year’s fair might be easier said than done. I therefore decided to take the matter into my own hands, and ask: “what’s new?” to the Project Leaders of eee 2018, Daniel Zidén and Samuel Spjuth.

I receive an ascertained answer when asking Daniel and Samuel about their main objective for this year’s eee-fair. And the environmental aspect has indeed had a heavy influence on the planning process.

– Our goal is to make as many people as possible feel included. Like they can make a difference. People might see eee as being “just a fair”, but at the end of the day, that is how it all starts right? We have to start off small in order to understand how to think big. We are convinced this fair WILL have an impact in one way or another on the students mindsets, and that is something we, along with our committee have worked very hard towards. 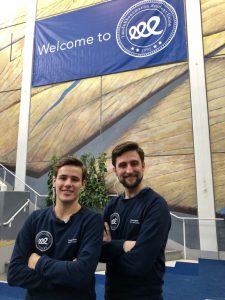 However, taking on a task as massive as having an impact on the minds of students at LUSEM might not be the easiest. How will they do it?

– We have tried our best with having an eye for details. The small things matter here. We will have a so called environmental corner at the fair, where students can inform themselves about this matter. We will now also utilize the eee-app as the main informational basis instead of printed brochures. Therefore, if you have not already downloaded it in the App Store, it is high time to do so! In terms of companies coming to the fair, we have given all of them an opportunity to climate compensate for their visit. Furthermore, our fair will be all vegetarian, both during the eee fair as well as the Pytten banquet. The theme of the banquet this year will be Let it Snow which is a good summary of our ambitions of engaging for a greener fair. And we hope this mindset does not only influence this year’s and perhaps next year’s fair, but all of the fairs to come.

The project Daniel and Samuel have nursed for the past year is approaching, and it is approaching fast. Now we know more about what’s new. And tomorrow will be our first chance of actually seeing it. Let’s buckle up and get ready for another amazing eee fair.