Uppsala, Lund, Stockholm. Even though these three cities are often portrayed as rivals in terms of universities, they came together during one night in Uppsala. And what a success it was. This year’s Gräddgasquen was held at Stockholms Nation, and me, along with 30 LundaEkonomer was of course there to show that it wouldn’t be a proper sittning without Skåne represented.

Even though the weekend in Uppsala was not officially supposed to start until Friday, it started on Thursday for me. In October, I received an invitation from the Editor-In-Chief of Reversen (the student union magazine of Uppsalaekonomerna), to attend their release mingle. I was of course over the moon (and became a bit more over the moon when she added that there would indeed be snittar there). After plenty of interesting discussions with the editorial team of Revvan, it was time to prepare for the next day of the Uppsala weekend.

On Friday, a group of Lundaekonomer started off the day with some good old sightseeing.  As an Uppsala native, I was of course one of the responsible ones to guide the confused skåningar around the city. The highlight for many was to see Silverbibeln, a famous 6th century manuscript located inside the Carolina Rediviva University Library. Other sights that impressed were: Slottet (The Uppsala castle) and Domkyrkan (Uppsalas famous church).

Friday evening marked the official start of the Gräddan weekend. Our sister union Uppsalaekonomerna had prepared an evening packed with activities for us at Borgen (their equivalent to Skånis). The evening ended with a legendary sittning. An important heads up if you go to Uppsala is: make sure to NOT forget your songbook. Uppsalabor are strict with always having their songbooks on every sittning (something those of us who left our songbooks back in Lund realized rather quickly). 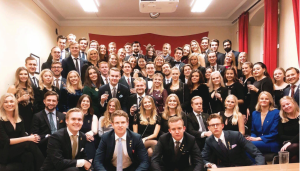 And so Saturday came. The day of the Gräddgasque had arrived. The day started off early (luckily there was plenty of coffee at Borgen to keep our energy level up) with workshops. We were paired together with our respective committee within Uppsalaekonomerna to discuss similarities and differences in how we work. For me, the discussions with the editor of Reversen: Julia, and art director: Sofia, continued, as we realized that we had loads in common, as well as loads we were eager to learn from each other. As we left Borgen, none of us felt the fatigue from earlier that morning. Rather the opposite. We were excited like never before. Gräddgasquen was approaching, and approaching fast.

When we later had made our way to Stockholms Nation (or Stocken as it is often called), Uppsalaekonomerna had prepared an eventful sittning for us. The main theme for the evening was Game of Thrones, and the table placement was mixed amongst students from Stockholm School of Economics, Stockholm University, Lund University and Uppsala University. The skånska speakers of LundaEkonomerna expecting a pun or two for their accent by the hosts were not left disappointed, and we had ourselves many good laughs together. Also, during the evening, the mythical LundaEkonomerna sign outside of Skånis that had been stolen found its way back to us. Thank God for that!

The sittning ended in the best thinkable way: by everyone singing EC together, before dancing the night away.