There is a lot of things I like about Lund. One of them is the endless amount of things to do, there is all different kinds of sports teams to join, lectures to attend and nations to work at. If I wanted to, and put some effort into it, I could be busy doing different things almost every day besides my studies. One of the things that I have appreciated and taken advantage of is Studentafton. Since its foundation in 1905 Studentafton have invited guests from all over the world; Olof Palme, Ingvar Kamprad and the last one I went to, Elizabeth Nyamayaro, the head of HeForShe, are just some of the names of speakers they have had through the years.

On the 27th of February, Studentafton had invited two members of the feminist, protest, punk rock group Pussy Riot; Lusine Djanyan and Alexey Knedlyaknovsky. The main topic of the night was activism, art and the freedom of speech. Every spot in Stadshallen was filled with an anticipating audience who, like me, was looking forward to listen to their story.

It all started of intensively, a video from the Winter Olympics in Sochi in 2014 was shown on the big screen where we got to see both Lusine and Alexey being whipped and beaten by Cossacks (a type of auxiliary police force) during a protest action arranged by Pussy Riot.

Today, and for the past 10 months their lives are looking a bit different. They are currently living isolated in a refugee housing outside Örebro while seeking asylum in Sweden. The move to Sweden was not something they wanted to go through, but in the end it was their only solution. Since 2011 when Pussy Riot was founded they have all, including Lusine and Alexey, been victims of harassments, assaults and violence. After the incident in Sochi, Lusine got fired from her job at the University she was teaching at and both of them got attacked both in public and on the streets. When the police threatened them with a long time in prison if they did not stop their actions, which meant that they would have to leave their child behind, they decided that it was time to leave the country.

It is hard to understand where they get the motivation to continue with what they do. Since waiting for their asylum they are not allowed to leave the country or participate in their art exhibitions. In Russia, Pussy Riot is seen as a threat by the regime and the public opinion about them is mostly negative because of the propaganda and the lack of knowledge. Throughout the years they have created discussions and gained supporters from all over the world which keeps them motivated to continue spreading their art and fight for the right of the political prisoners in Russia. All this despite the consequences, because they see that it is working and it is making a change. 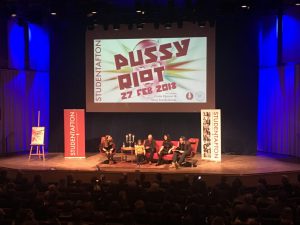 Despite the serious topic and the frightful stories Lusine and Alexey told us, the night couldn’t have gotten a better ending. When finishing the Q&A at the end, the backdoor of the stage opened and Tigran, Lusine and Alexey’s two-year-old son walks up on stage to a round of applause. He ran happily towards his parents, embraced them and then walked to the front of the stage, raising his tiny hands and bravely demanded more applause from the audience. I could not have agreed with him more, Lusine and Alexey deserve all the applause for their courage and their belief in the freedom of speech.