Elizabeth Nyamayaro, the head of HeForShe, Senior Advisor to Under-Secretary-General and Executive Director at UN Women visited Studentafton in Lund the 24th of October. The main topic of the night was the equality movement HeForShe and to talk about the importance of reaching gender equality.

Elizabeth walked up on stage and held a speech about her childhood in Zimbabwe. It was when a famine hit her village that she for the first time came in contact with the UN. She repeatedly mentioned The girl in the blue uniform that gave her food for the first time in days. After this meeting, and after experienced inequality for the first time, Elizabeth knew exactly what she wanted to do; she wanted to uplift others like she had been uplifted by the girl in the blue uniform. She has now worked at the UN for 15 years and help positions at both UN Aids, the World Bank, the World Health Organization and UN Women. 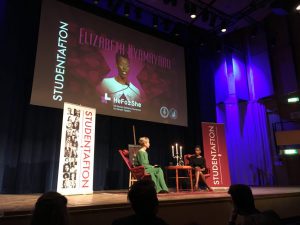 The movement HeForShe was founded in 2014 by the organization UN Women with the purpose of encouraging humans to take a stand on gender equality. In the beginning they aimed initially towards men and boys but with time their focus has changed and now, as Elizabeth expressed it –  they invite the world to stand together. What she wanted with this movement and what HeForShe is all about is to acknowledge that gender equality is not a women’s problem to solve, men has to be included in the discussion and be a part of the progress. To express in a different way Elizabeth asks if we at Swedish restaurants use the expression: “bring your own wine”. But instead of wine she want’s everyone to “bring your own men”. Everyone, including Elizabeth herself, starts to laugh, but looking out at Stadshallen I could really see what she meant, since more than 90 percent of the audience is female.

I think many of us have seen the admirable video of Emma Watson, the UN Women Goodwill Ambassador, speaking at the UN Headquarter in New York. That was the launching of the HeForShe movement. Elizabeth tells us about the nervous seconds before Emma walks up on stage. None of the people involved knew what the response was going to be and they asked themselves – do men care about gender equality? The answer was yes. Only 3 days after the launching more than 100 000 men had signed up to the campaign and also asked what they can do to help. She proudly tells us that our prime minister Stefan Löfven is highly involved in the campaign and that Sweden is the first country in the world to have a feminist government.

I found this lecture incredibly inspiring and I’m happy that I got myself out in the unfortunate pouring rain and cycled the 15 minutes to Stadshallen to listen to Elizabeth. Even though I was soaking wet and cold from the rain the whole time, it was worth every second of it. What Elizabeth presented to the listening audience was that to get a hold of this problem we have to stop fixing women and start fixing the system, we have to bring awareness of what’s going on and stand together and work for gender equality. Even though the #metoo campaign has brought an important amount of attention to this question during the last couple of weeks, the strive towards an equal society unfortunately can’t be achieved exclusively through a hashtag. Essentially it is about a long-term change of attitudes and structures, so let’s not forget: gender issue is a global issue.