It is often referred to as the biggest platform for politics and business in Sweden, and here you’ll find everyone from representatives from Sweden major political parties, to large companies aiming to exploit themselves to a broader audience. Thus, the Almedalen week is often perceived one of the year’s most exciting events. Ever wondered what it’s like to spend a week with Sweden’s most powerful people? Wonder no further; here is everything you need to know about my week in Visby.

The history of Almedalsveckan starts with Olof Palme. The former Swedish Prime Minister used to go on vacation with his family to the Swedish island of Gotland, and what started as improvised speeches in Almedalen (the park in Visby the event is named after), eventually became an annual organized event. The first official Almedalen week gathering all political parties was arranged in 1982, and it has been arranged yearly ever since. In terms of development, Almedalen started off as strictly political, but this has changed considerably throughout the years. Today, one can also find a substantial part of Sweden’s business sector here. For instance, I see it as no coincidence that Saab presented their business goal of becoming a 100 % renewable company by 2040 in Almedalen this year. Companies see the beneficial aspects of introducing themselves here, with the broad coverage of Swedish media in mind.

Well then, what did MY week in Almedalen consist of? I visited Almedalen in purpose of studying a summer course in political oratory, and I will start by saying it was one of the most fun and most educational weeks of my life. To narrow it down, my days consisted of taking part in interesting seminars, listening to the speeches of Sweden’s political leaders live, visiting events with the opportunity to mingle with acknowledged people within the political and business sector, reading course literature about the history of rhetorics, visiting Gotland’s many beautiful sights and of course, a little bit of dancing at Kallis and Gutekällaren in between. I will now give you a short summary of some of the events I visited, and found to be the most interesting.

“The digitalization of 2017” – Today’s digitalization of banks as well as our society overall was the main topic during this panel debate organized by Dagens Industri,featuring names such as Ulf Kristersson (the party leader of Sweden’s moderate party) and the CEO of Nordea Sweden, Casper von Koskull. The discussion also featured entrepreneurs within the digital sector, speaking about the future development from a business point of view. 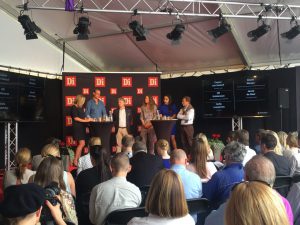 Photo: Demet Olgac
“The battle of the supervisors, how to be a good leader” – Since I was in Visby studying oratory, this duel featuring famous Swedish rhetorician Elaine Eksvärd truly came in handy. The duel featured chiefs from different municipalities in Sweden (the second duel was between Uppsala and Lund, so as a Uppsala naitive, it was close to impossible to decide who to route for), who were given different situations, and competed in their rhetorical abilities to handle them in the best way possible. And the final winner was…”drumroll”… the candidate representing Lund! 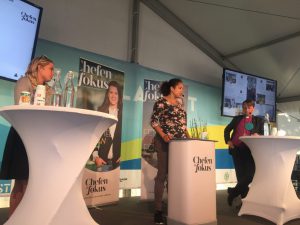 Photo: Demet Olgac
“Opinion Live” featuring.. Demet? – That’s right. I got my first TV-experience in Almedalen through being an audience member on the SVT show “Opinion Live”, airing every night during the week. The show features discussions with the party leader of which held their speech earlier that day (Almedalsveckan consists of 7 days, where every party is given their own day), and other interesting guests. I was on air, sitting only a couple meters away from Annie Lööf, Petter Stordalen and Jan Guillou, and also got the chance to chat with them afterwards. Indeed a cool experience! 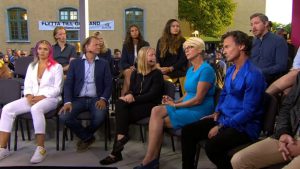 Photo: SVT
Almedalen has in the recent years received criticism for not being inclusive enough, and current Swedish prime minister Stefan Löfven did not attend this year for that specific reason. In an interview with TT, he claimed Almedalen needed to go back to it’s roots and become more of a popular movement again, rather than attracting mainly the power elite in Sweden. However, I still think it is worth a visit as long as you have this in mind while visiting, and it is indeed hard to find a place where you have companies and political parties gathered in one spot at the same time. If you would be interested in visiting next Almedalen, it will be held in July 2018. I would also highly recommend applying for the course in political oratory held by Uppsala University.