Marika Carlsson is a comedienne who broke through with the standup performance ‘’A niggers upbringing’’, which was streamed on SVT Play and seen by over 700,000 viewers last winter, provoking many by its title. Now she’s back with a new standup show called ’’I am God’’, in which she addresses the charged topic of religion. She was adopted by a Swedish family during the Ethiopian famine and raised in the Pentecostal Church in Lund to reject homosexuality and put God above all else. Then she fell in love with a woman and put religion away. Can you really joke about sexuality, existentialism, faith and God? Marika believes you can, and should, to raise a discussion. Nådiga Lundtan chats with Marika to inquire about the show and her opinions today.

As a young woman you were anti-abortion, homophobic and against sex before marriage. Now you have the exact opposite opinion. How did that change?

The Church shaped me as a young girl and I did not question it. It made me extremely judgmental toward people and my surroundings, and worst of all towards myself. Today, I live with a woman and I do not go to church. But this change of opinion wasn’t something that happened overnight. There were just new ideas I started gravitating to, once I began questioning my surroundings. I used to judge people, friends even, and then I realized that it doesn’t really do anyone any good.

Do you think we should talk more about religion?

Yes, I think so. Religion is interesting, exciting and fun. We comedians have to push the envelope and talk about things that you do not talk about in everyday life. Difficult, taboo things that are awkward to discuss otherwise. Today there are so many substitutes for religion, I could argue that teachings like mindful- ness are a form of religion. I personally don’t follow a religion anymore. I’m not against faith or spirituality in any way but I do question the rules and limitations that religion places upon people. I love talking about the subject and questioning it, poking at ideas I don’t agree with. That’s what I do in the show, with humor.

What was it like growing up as an adopted child in Lund?

Well, I had both good and bad experiences, of course. Where I’m from, there weren’t many black kids on the play- ground. With the university in the center, I find Lund lacking in diversity some- times. That causes kids to act out. There were a lot of ugly words thrown my way, to put it mildly. I sometimes struggled in school. My last show ‘’A niggers upbringing” tackled those experiences. 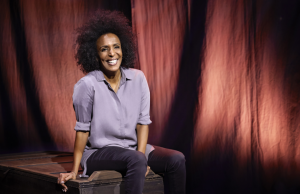 You were involved in the university-life in Lund for a while as well.

Yes! I studied theology for a year and did some acting. Oh, and I hung out a lot at Östgöta and Malmös. Those were the favorites. I know the nation-life well. Good times.

The day after our chat, I am invited to the show. I take a friend and we walk down the aisle to take our seats. I’ve never been to a standup before, and even though Marika sounds great over the phone, I’m not sure it’ll be my cup of tea. Oh, how wrong I am. The second Marika enters the stage, the whole room feels warmer. She connects with the audience right away and they in turn follow her every whim, cheering her on in her performance, laughing with her, even dancing with her. By the end of the night we are all howling with laughter. She isn’t just charismatic anymore, she is actually hilarious — with jokes personal, canny and culturally relevant. She jokes about conservative opinion, especially the attitude towards homosexuality. But there is never any humiliation or slander of Christianity. In the center of the story is Marika Carlsson’s own journey from what she describes as a “fundamentalist” young pentecostal who preaches to her friends in class as a child, to the Marika who leaves the church to fight the opinion on homosexuality with humor. The anecdotes are very entertaining. As we walk out of the theatre by the end of the night, all I can think of is how it takes a person of true valour to actively transform her own difficult experiences into gut-wrenching laughter for her audience, and success for herself.

“I am god” runs tours around Sweden in the upcoming months. Catch it. Laugh with it. Learn from it.