So, you just met the first five members in the new board of Lundaekonomerna. Now it is time to meet the rest! Who makes the best chocolate cake, who wants to live in One Tree Hill and who wants to collect as many medals as Marcus Morey? Time to find out! Choose one celebrity on your position in the board of Lundaekonomerna. Which one would you pick and why?

Imaginative, I would say Avicii, he would live up to my standard of playing ‘’Wake me up’’ and ‘’Levels’’ around Skånis 24 hours a day, 7 days a week. And he unites people, both in Sweden and Internationally.

What do you eat after an evening at Casanova?

The key is to have a large variety when it comes to what you are eating. My favourite places to go after a night at Casanova are Challes and Lundafalafel.

Which town do you prefer- your hometown or Lund?

I would prefer Lund over my hometown (Berlin) because of the large student community here which is something different than Berlin.

What is your hidden talent?

My hidden talent is that I am very good at bartending and creating amazing drinks! (Free of alcohol of course)

I look forward to going to all awesome balls in Lund, collect as many medals as Marcus Morey, work with an awesome team, meet a lot of new people and finally release a LundaEkonomerna bag that is better than Uppsalaekonomernas. 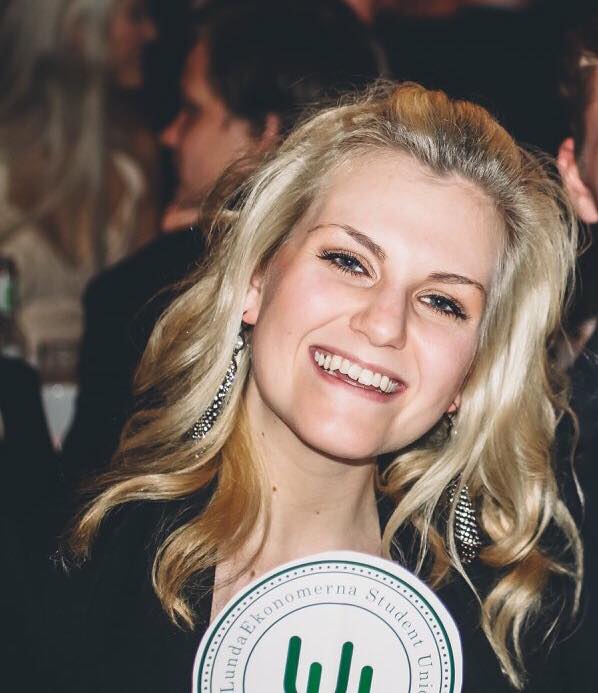 What is your dream job?

When I am done with my education here at LUSEM, I will have two bachelor’s within Business Administration and business law. I would like to do something within that field when I am done, maybe Management consulting.

What informal role will you have in the new board of Lundaekonomerna?

I hope that I will be the person who will spread joy and happiness within the board, both as a friend and a colleague. That is how I would like people around me to see me as in this role.

I can spend hours and hours looking at new clothes online! Also worth mentioning is the large amount of time I spend watching youtube clips.

Describe yourself with 3 words and a dish.

Creative, Including and Helpful. The dish I would pick would probably be a risotto, because when you are making it, you need to put lots of effort and love into it. That is what I do with whatever I am engaged within. Also, it is quite cheesy, just like me.

I look forward to being part of shaping this new role for future boards to come, as it is a pretty new position in the board and me and Chris have different backgrounds. But I also look forward to working with the rest of the gang. I know Adam and Jakob well since earlier, but I want to get to know the rest of the gang as good. With our different experiences, I believe that we can do an amazing job! If you would win 10 million dollars here and now, what would you do?

Except for being a bit boring and invest large part of it, I would buy a house near Lake Como and do a trip around the earth straight away. And most importantly, make a donation to save Skånis.

Where are you on a friday night- out dancing or at home watching Netflix?

You often find me out dancing at a nation, but I also like to spend time at home, perhaps eating dinner with my friends or reading a book and watching netflix.

Which superhero are you?

I would say Iron Man, because of his cool gadgets and will of being the greatest superhero of all time, and I mean, his penthouse and skyscraper are not that bad.

What did you do this summer?

I spent most of my time home in Södertälje and met family and friends. Had a great time.

I think it will be to meet all members and new members of Lundaekonomerna, and get to spend time with them at Skånis. Which is your favourite song, and why?

If I would have to choose another song than one by Taylor Swift (Henrik screams from the other side of the sundeck at Skånis that Rebecka can’t pick a song by Taylor Swift), I would pick Life on Mars with David Bowie.

Would you rather be a famous musician or a sports star, and why?

Definitely a famous sports star. My musical skills are not that great.

What is your secret superpower?

I would say that I am great at making chocolate cake (kladdkaka)!

If you would live in another decade, which one would it be?

I would like to live in France during the 1800’s, during the Napoleon era. That would be quite cool, as I am very fond of french history.

What do you look forward to the most this year within Lundaekonomerna? Who is your role model and why?

I would say that my role model is my mum. In my family, she was always the ‘’girl on my side’’.

If you could live in a TV-show, which one would you pick?

The TV-show that I would select is One Tree Hill. This is mainly because of Lucas Scott, who was one of the actors in the show. He was actually my teenage crush!

Which is your favourite commercial?

What place in the world would you most of all like to visit?

At the moment, I would like to visit Hawaii! A nice and warm place with sunny beaches, heat and of course hula-hula dancing!

Having the role as the internal relations coordinator within the new board, I look forward to meeting and supporting all active members in their work within Lundaekonomerna.