Freddie Mercury started singing about champions back in 1977. 40 years later it was time for Lund’s very own champions to prepare for Kuala Lumpur. A couple of weeks ago, In Case of Consulting won the national final of the KPMG Case Competition, not only providing them with a flight ticket to Malaysia in April, but also the honor of representing Sweden in the International Competition. They competed against the winners of the local competitions coming from eight top universities around the country, and the national final took place right here at LUSEM! But what is it de facto like to take part in the world’s biggest case competition for business students? I have spoken to someone who knows it very well. Timothy Liljebrunn was one of the contestants in the winning team, and I got the chance to chat with a very cheerful Timothy a couple of days after the victory. 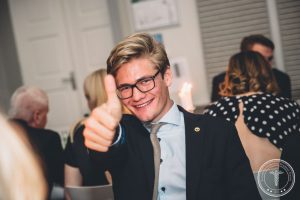 Hey Timothy, thank you once again for sitting down with me today! How come you wanted to take part in KICC?
Of course, it is a pleasure! Personally, I saw it as a springboard towards my future dream employment. Many of those competing are eager to pursue a career within consulting, and I myself would love to work with business development after I graduate. I believe that participating in these kinds of competitions gives you plenty of valuable experience that you can use later on. What’s more, it truly gets you out of your comfort zone and is in such way developing from an endless amount of aspects. However, I cannot emphasize enough how FUN it is as well, and I would recommend everyone to take part in it! 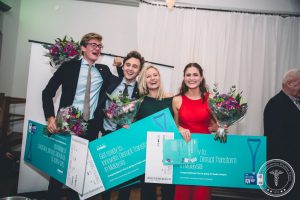 The winning team. Photo by LundaEkonomerna.

From a practical point of view, how were the days scheduled?
The national competition lasted for three days, and we were assigned one case per day. In terms of volume of complexity, it increased day by day. The first case was rather straight forward, and could easily be put into context. The second case was notably harder, and more challenging to put into context. The third case was incredibly tough and included numerous amounts of challenges for the company. Unlike the previous days, where the cases had a business to business approach, the third case highlighted the disputes within a state-owned company, which made it harder to break down. However, even if it was indeed the toughest, I can unquestionably say that the last one was the most intriguing. Thereafter, I found myself thinking more creatively than I had during the previous days, which was a pretty cool transition.

Could you describe the process of receiving a case to actually presenting it in front of the judges?
Yes! Once our three hours of solving time started, we had a clear structure from practicing. We started off by reading the case for twenty minutes. Since the cases consist of approximately thirty pages, one rarely has time to read everything, meaning that it comes down to maximizing your given time. This was followed by a forty minute long discussion about the case, where we as a group analyzed the given company, pinpointed their main challenge, how we would recommend them to solve it, how this solution should be implemented practically, and finally, built a conclusion including the risks we observed. When the broader conversation ended, we continued with seventy five minutes of individual work with the purpose of getting every group member acquainted with their respective area. Our team divided these as following: Jesper took care of the analysis, Anna of the implementation, Lovisa of the financial aspects and I of the PowerPoint as well as the introduction and overall conclusion of our work. We then proceeded by finishing our PowerPoint, and while I was compiling all slides into the presentation programme (that the others initially had drawn by hand), they continued the process of reading up on their areas. Following this was a fifteen minute long final discussion about the case, (and also a shorter session of taking a couple of deep breaths if we had the time), before heading out to the judges to present our case.

Preparing for the final presentation. Photo by KPMG Sweden.

Do you have any advice for students that are eager to participate next year?
The most crucial aspect to understand is that we are not super humans. We are all equally as bad the first time we try case solving. Having a business background is not a must when competing. It comes down to having the courage to TRY! I was never the brightest one in my class, and in theory, there was a lot of people who would have been a better fit than me. It is about trying your wings, and just going for it.

Okay Timothy, one last question! How psyched are you for Kuala Lumpur?
SUPER PSYCHED! I can’t wait!