As students at the Business and Economics program, we will all eventually have to make a decision on which advance courses to pursue after finishing our A-level ones.
A decision that for some might be easier than for others. Just a couple of months ago I was sitting there, thinking of which path to choose. Economics B, or Business Studies B?  When looking back, I think it was a certain trip who opened my eyes and helped me make the decision.

On the 7th of May, 24 excited students jumped on the train to Stockholm. It was finally time for the Lund Economics Stockholm Tour (LEST). One month earlier we had all been contacted and told that we were the lucky ones who would go to Stockholm and visit 9 companies. That was a month filled with meetings and preparations. A CV had to be put together, some personal letters had to be written, and we all wanted to be fully prepared for what was to come.

This is, as you maybe already know, a project within LundaEkonomerna. Every year the LEST-committee is putting together a trip for students who have an interest in economics. The tour goes on for three days and the companies varies from year to year. Last year when I went, we visited everything from banks and consulting firms to NGOs who works with development countries, so there is definitely something for everyone! 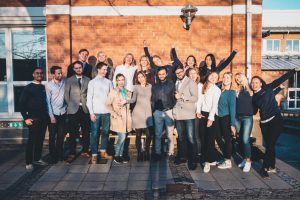 The 2017 LEST team. Photo by LundaEkonomerna

Each company had a different plan for our visit, but all of them were determined to make the most out of the time we had. I must say that I was happily surprised about the many creative activities the companies had planned for us. A majority of the companies gave us challenging cases to solve, other companies chose a more traditional path and gave us profitable tips for the future.

After three intensive days my head was filled with a lot of new information and thoughts about the future. Earlier on, I had found it a bit difficult to understand what a career in economics could look like. LEST is the perfect opportunity to meet companies in a more down-to-earth environment and get a feeling of how it would be like to work at their company, or perhaps at a similar one. I can definitely say that the trip helped me fill out some blanks and I would gladly recommend everyone to apply!

So, as you probably have figured out by now, I ended up choosing economics as my advanced course. And as previously mentioned, maybe it was the experience I got from this trip who helped me make this decision. And it might do the same thing for you.

This year’s Lund Economics Stockholm Tour will take place on the 23-26th of April and the application will be open between 1-18th of March. The trip is primarily aimed for students who are taking the advanced course in economics and higher levels, but everyone who has an interest within the subject and want to find out more should definitely apply! Make sure to keep your eyes and ears open for more information, until then, read more about the committee and this year’s trip at: http://www.lundaekonomerna.se/committee/lest/.