At 8 o’clock in the morning a cold day in April, I went to Lund C to meet up with a group of 20 students, travelling to the deep woods of Småland or more specifically to the town of Älmhult. Älmhult is a place that might not have been much for the world, if it did not happen to be the birthplace of IKEA, one of the things most associated with Sweden worldwide. And it was IKEA we were about to visit. On the train to Älmhult, I had a chat with the bachelor students Erik Sandahl and Hanna Elmteg.

Erik and Hanna, what are your expectations of the day?

Erik: ‘’I think that it will be great fun to learn more about such a complex organization as IKEA. Moreover, I am interested in finding out more about the different positions at IKEA and to learn more about why people have chosen to pursue a career at IKEA. And also to see Älmhult!’’

Hanna: ‘’Like Erik, I want to know why people start to work at IKEA and what positions that are available for us studying the bachelor’s programme in Business and Economics. Also, I hope to find out about why everyone at IKEA enjoy their workplace so much, and of course the meatball lunch!’’

*Hanna Elmteg and Erik Sandahl, two of the participating students.

Led by Erik Håkanson, the contact person for IKEA in the Corporate Relations Committee of Lundaekonomerna, we got off the train in Älmhult and went to the old IKEA store, the first IKEA in the world. The old store, which opened in 1958 and was inspired by the Guggenheim Museum in New York, was just a couple of years ago turned into a museum when IKEA opened their new store in Älmhult. The first thing one notices when entering the building is a photo of founder Ingvar Kamprad, who passed away in february this year, along with the vision of IKEA: ‘’To create a better everyday life for the many people’’. Upon having a closer look at the photo of Kamprad though, one can see that the photo consists of many, many smaller photos, portraying thousands of all employees at IKEA.

We met Henrik Wremp and and Rosanna Segerstedt Pillay, both working within HR at IKEA, and headed to a room in the museum that was pretty similar to a classroom. Henrik and Rosanna gave us an introduction to the day as well as some interesting facts. Did you for example know that all copies of the IKEA catalogue are produced in Älmhult? Later on, they came to the question lots of the participants wanted an answer on- what does the recruitment process look like for a job at IKEA? Although we are told that there are many different processes when it comes to hiring new employees, such as group tasks and interviews, the main thing that matters is personality and the opportunities for development. This is something with great value compared to a thick CV, according to Henrik and Rosanna. IKEA has 8 values which they put lots of focus on; Simplicity, Togetherness, Cost-consciousness, Caring for people and planet, Renew and improve, Lead by example, Giving and taking responsibility, and being different with a meaning. If you feel like the values are something you can identify yourself with, it could be beneficial in recruitment.

We also met Matt Evans from the United Kingdom, a project controller at IKEA, and Bastian de Vrijer, a business navigator from the Netherlands. As a business navigator at IKEA, Bastian works with Business intelligence and analysis, finance and administration, although he admits that he spends some time in Excel. His position involves a lot of communication and travelling, and Bastian tells us about some of the journeys he has done during his time at IKEA. So does Matt, who as a project controller ‘’knows a little bit about a lot’’. As a project controller, Matt works a lot  with product development. Both Matt and Bastian emphasize the importance of planning, as a product is actually developed years before it can be found in a store.

Ingvar Kamprad himself said that ‘’You can’t make business on an empty stomach’’, which is the reason to why there is a restaurant in every IKEA store. There is also a restaurant at the IKEA museum, where we had our lunch after we had met Matt and Bastian. However, the restaurant was a bit different to the restaurant one can find at a store. The restaurant in Älmhult serves five different types of meatballs: ordinary meatballs, chicken balls, salmon balls, vegetarian balls, and one seasonal visit – at the time of our visit moose meatballs. I had to try the moose meatballs, which were truly delicious! 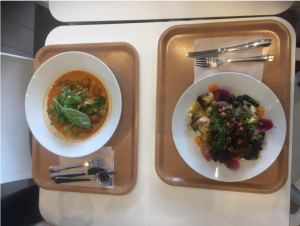 *In the picture, you can see the moose meatballs to the right, served with chanterelles, winter cabbage, apple and celeriac sauce, roasted seeds and bacon butter, as well as the salmon balls to the left, with glass noodles, tomato, lime, coriander, coconut milk and Tom Yum bouillon.

One who actually had a traditional meatball plate with meatballs, potatoes, lingonberries, pickles and gravy for the first time in her life was Kathery Razo, an exchange student from Mexico studying the master’s programme in finance.

‘’It was truly delicious! The meatballs was the thing about the dish that I enjoyed the most. Although, I was very surprised that they were so small! The sauce was also very tasty’’.

After the lunch, we were given a guided tour of the museum. Our guide Karin brought us on a journey through time, from the 1850’s when furniture became something vital in Swedish homes, to Folkhemmet when 4 million apartments were built, requiring furniture, and IKEA’s rapid global expansion which began in the late 70’s. We also learned about ‘’Democratic Design’’, the five elements that are the foundation for product development at IKEA: a low price, quality, the form, sustainability, and the function. At the end of the tour, we came to a photo-booth where we could put ourselves on the cover of the IKEA catalogue – for sure one of the highlights of the day!

After the guided tour, we rounded off the day together with Henrik and Rossana in the room where it all began, and afterwards, we headed to the train station to take the train back to Lund. I had a recap with Hanna and Erik about their thoughts about the day.

Hanna and Erik: We thought that the visit was fantastic. You really got a feeling about what the culture is like at IKEA, with all of their core values, as well as a new perspective on CSR. Also, we can recommend visiting the IKEA museum and take a guided tour with Karin, who was a fantastic guide!

For my own part, I came to think about one quote by Ingvar Kamprad- ‘’Many things remain to be done. A glorious future’’. In my opinion, the visit at IKEA was very inspiring and even though Kamprad is no longer alive, these are words to live by. I do not doubt that IKEA will continue to grow, and be part in the creation of a glorious future. Are you interested in a career at IKEA? Then, have a look at their career website ikea.se/jobb. With 194 000 employees worldwide, there are lots of career opportunities within IKEA, maybe one that suits you perfectly?