Time is 07:20 as I walk towards Lund Central station. Life as a commuter I suppose. At the station I meet Louise, IKEA’s contact person in the Corporate Relations Committee. Today is IKEA day and we’re a group of 15 taking the train up to Älmhult to visit the headquarter of IKEA to get a feeling of what it’s like working there.

We meet Henrik, HR Specialist, who provides us with coffee and a second breakfast before he shows us to a classroom-looking room. First, he tells us about IKEA. How IKEA is not one company but a concern consisting of sixteen companies, which employs almost 180 000 persons around the world. 4 900 of them is stationed here in Älmhult. IKEA’s vision, “to create a better everyday life for the many people”, is a phrase I get to hear many times during the day. Another one is that IKEA is a value-based company. Everything they do is according to their eight values. Some of them are simplicity, togetherness and cost-consciousness.

There is no point in hiding that what we students want to hear is about recruitment. IKEA receives 75 000 applications each year and here Henrik once again emphasizes simplicity. “Grades are important but do not tell anything about who you are.” Generally, they first look at the personal letters to see if there is a match and then they look at the CVs to see if there is a perfect match. If there seems to be one you’ll first get a phone interview made with a value-based technique.

Someone jokingly ads “and then they’ll have to build some furniture” and Henrik does not deny this. Building furniture is a way of seeing how people think and work together in groups.

His golden tip is: “be yourself, we’ll find out otherwise”. He further tells us about IKEA’s one year long Management Trainee Program (application will be open in the mid autumn) in which they look for future leaders. Ten to fifteen persons start with a month on the front in a store and then they’ll be assigned different tasks and also get leadership educations.

As Henrik is done, Christoffer enters the room. He works at IMS which stands for Indirect Material and Services. IMS does all the purchases for IKEA warehouses and offices, such as racking, cleaning service, computers and security services. He has been at IKEA for 19 years and mentions that the best thing about his work is the freedom, as there are no limits, and also all the good colleagues. He leaves us to get an hour in the gym in the activity house.

After another fika-break, Björn joins us. He is a Business Navigator at IKEA of Sweden and has been for six months only. He graduated at Lund University four years ago and has since worked at both PwC and EY as a consultant. But after a couple of years he thought he was getting old and wanted to do something different so he started at IKEA where he now feels very young. Henrik lets us ask many question about not only IKEA but also about what a student ought to focus on and expect before he finishes with telling us the best things about being an employee at IKEA: the strong culture, that IKEA’s and his own success is on the same path and all the opportunities within the company.

We now walk to check out the activity center. First, we spot a gym, perhaps Christoffer is in there? As we reach the end of a corridor we see two guys playing ping-pong around a table. We walk up a stair and the view surprises me. In one room there is a yoga class. There is also one big indoor multi-hall which is split in two by a wall. On one side a couple of men are playing floorball and on the other side there seems to be some sort of cross fit exercised. The activity center did really surprise me positively.

It is now time for lunch. We walk into the restaurant in the IKEA museum. The menu consists of meatballs and different versions of them. Chickenballs, veggieballs, salmonballs and so on. Delicious of course. 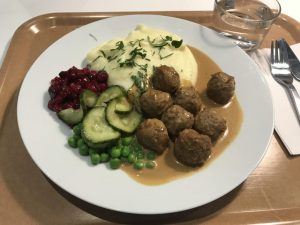 After lunch we go into the museum. The museum opened about one year ago in the place where the first IKEA store ever opened. The store closed four years ago as a new one was built in the area. Our guide first takes us to a “classroom” where we sit around three tables. He introduces us to a workshop in which we are to make a little piece of tinfoil float on water with as many washing coins as possible on it. We try and a girl, Amanda, managed to get 43 coins on her. Then we are advised to work together, to sneak peak on each other and try once again. This time everyone improved and I set the highest number of 64 pieces. The purpose of this workshop was to highlight teamwork. “Teamwork work” as he repeatedly says.

He then leads us into the museum in which he shows us some parts and tells us about how IKEA work with sustainability and changing housing conditions and family constellations. The values Henrik told us about in the beginning appears in almost every sentence, which shows that they are not just marketing and good-looking but real guidelines for the work of IKEA.

Before we head back to Lund we get half an hour to explore the very interesting museum. Louise and I visited the gift shop and fell in love with some bags they sold. They were like the blue ones you buy at IKEA but in different colors. They also sold some very cute iconic furniture in miniature and much more.

As I sit on the train back I start getting convinced that the commuting is worth it. IKEA is not only a schoolbook example of a success story, it is also an inspiring place to visit and work at.